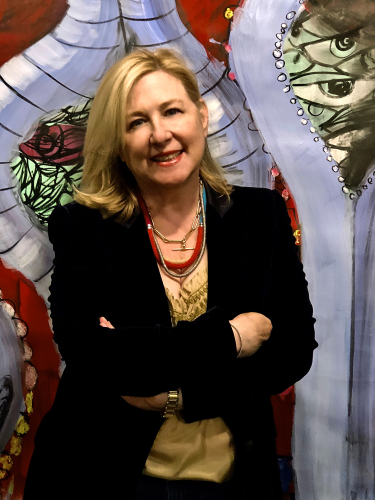 Deborah Buck in her studio

Artist, author, entrepreneur and designer, Deborah Buck, maintains that painting informs all her endeavors. Originally from Baltimore, Buck credits her early artistic and intellectual development to her encounters with the legendary Abstract Expressionist painter, Clyfford Still, who mentored her as a young artist and sponsored her residency at The Skowhegan School of Painting and Sculpture in Skowhegan, Maine.

After graduating with honors from Trinity College in Hartford, Connecticut, Buck accepted a position with a subsidiary of Walt Disney Productions, where she designed animated displays for installation throughout the United States and Canada. As a key member of the Art Department, Buck was responsible for conceptualizing, designing, illustrating, engineering and interfacing with clients of animated displays within the enclosed shopping center industry.

Exhibiting professionally since the 1980s, Deborah moved to New York City  where she was immediately selected to be an Artist in The Marketplace (AIM) by The Bronx Museum, which honored her In February 2017 for her support of The Bronx Museum as an AIM alumni. Buck maintains an active exhibition schedule, showing recently in The Hamptons, Hartford, CT. and New York City. Deborah’s most recent works on paper reveal her fluid use of ink, pastel and acrylic paint. She continues to explore the interplay of surrealism and abstraction in her work, where her long held interests in absurdity, romanticism, and the darker side of fairy tales lend a strong narrative sense to her practice. Esteemed critic, Gregory Volk, wrote succinctly about Buck’s work in 2017.

In 2001, Deborah opened Buck House, a fine art and furniture gallery on Madison Avenue.  Acting as a salon, Buck House often hosted members of the art and design communities in social and academic gatherings. Buck House was not only a very successful business enterprise, but one that challenged the notions of art, design and entrepreneurship. Buck House closed its bricks and mortar  business in 2012 after 11 years on Madison Avenue. The extensive press coverage of Buck House exists here.

For the last 10 years Buck has played an instrumental part in New York’s  arts education as both member of the faculty at New York’s School of Visual Arts Master’s of Design Program (Deborah funded the Christopher and Deborah Buck scholarship to one enterprising student a year for $25,000) and as a Trustee of The Pratt Institute in Brooklyn, New York where Deborah was involved in consultations regarding all architectural projects including several new state of the art buildings and a film center. She has also been a member of The Fine Art Committee at The Longhouse Reserve in East Hampton.

“The artist never entirely knows — We guess. We may be wrong, but we take leap after leap in the dark.”
Agnes de Mille